This guide provides resources for Social Work students to investigate the history and context of statutes, court decisions, and other policies related to the Social Work profession.

Explanations of the legislative process and the publications produced at different steps are available from both the Senate and House of the U.S. Congress, but my favorite source is "How a Bill Becomes a Law" from Schoolhouse Rock.

Below is information from ProQuest Legislative Insight on the Patient Protection and Affordable Care Act.

Enacted March 23, 2010, PL111-148, the Patient Protection and Affordable Care Act was the most comprehensive Federal reform of the U.S. healthcare system since the creation of the Medicare program nearly 35 years before. Viewed as the signature domestic policy achievement of the Obama administration and colloquially referred to as “Obamacare,” after President Barack H. Obama, the act was passed following years of effort to address a variety of interrelated issues that were placing increasing strain on the nation’s health care system. The result is a complex law with provisions addressing (among other things) precipitously rising healthcare costs, medical coverage for individuals with preexisting medical conditions, and the disproportionate costs of insuring young, healthy individuals in comparison to older individuals with more health problems.

Passage of the Patient Protection and Affordable Care Act was the culmination of a dizzyingly complex history of Congressional action aimed at reforming healthcare in the United States. The legislative history for PL111-148 brings this history together, allowing the researcher to track the development of these disparate initiatives over the years. Related bills, Congressional hearings, as well as numerous Congressional reports and debates recorded in the Congressional Record are all aggregated to track the process of enacting this complex legislation.

Use the Select a pub type box at the top of each legislative history record to jump to bills, Congressional Record excerpts, reports, documents, hearings, or CRS reports.

Examples of the types of publications included in the legislative history of the Patient Protection and Affordable Care Act:

In addition to the individual insurance mandate and the system of subsidies and health insurance marketplaces that are central to the Patient Protection and Affordable Care Act (PPACA), the law incorporated congressional initiatives to address problems in the U.S. healthcare system from earlier Congresses. For example, a researcher can compare Title VI, Subtitle H—the Elder Justice Act of 2009—of the enacted law to the related 107 S. 2933from the 107th Congress, or 108 H.R. 2490 108 H.R. 2490, another related bill from the 108th, tracking the changes made in the process of enacting Elder Justice legislation into law. Similar research can be conducted comparing the provisions of PPACA supporting education and research into postpartum depression to bills addressing the issue introduced in earlier Congresses.

Researching the Congressional Record provides insight into the parliamentary strategies employed to assure passage in both the House and the Senate, as well as the differences between the versions passed by each chamber. For example, the version of 111 H.R. 3590 passed by the House included a provision for a single-payer, federally administered public health insurance option, yet this provision was not in the version passed by the Senate and ultimately not in the final version signed by the President. Though the original version of the bill enrolled in the Senate did not include a provision for a public option, an amendment to the bill introduced by Senator Bernard Sanders of Vermont would have added a public option to the Senate bill. However, search the Congressional Record Daily Edition for December 16, 2009, to read where an objection by Senator Thomas Coburn of Oklahoma to a unanimous consent agreement to consider the amendment as read would have required a reading of the full, lengthy amendment on the Senate floor before debate on the bill could proceed, forcing Senator Sanders to withdraw the amendment.

Senate reports from the 108th, 109th, and 110th Congresses recommend passage of bills aimed at protecting older Americans considered in each of those Congresses. These reports include summaries of the respective bills, the history of their development, cost estimates and summaries of the views of the committees considering the bills. Further, on October 15, 2007, a report was submitted by the House Committee on Energy and Commerce, recommending the passage of the Melanie Blocker-Stokes Postpartum Depression Research and Care Act. The provisions of this bill, 110 H.R. 20, can be compared to PPACA Sec. 2952, which provides for research and education for postpartum depression.

Learning the lessons of failed attempts to pass comprehensive healthcare reform in the 1990s, House Speaker Nancy Pelosi simultaneously tasked three relevant House committees—Ways and Means; Education and Labor; and Energy and Commerce—with reviewing the original House bill and returning with recommendations. Research the Comprehensive Health Reform Discussion Draft issued in conjunction with the Energy and Commerce Committee hearing from June 23-25, 2009 to see the results of the Tri-Committees’ discussions, or the 4-page summary of the draft issued by the committee.

Research CRS reports to learn about the implications of PPACA on private health insurance from April 15, 2010, or on Medicare from April 21, 2010. Or, research the impact of the provisions of PPACA relating to the Children’s Health Insurance Program (CHIP) and Medicaid from May 13, 2010.

How far back the database goes with fulltext varies. Testimony at Congressional committee hearings, for example, should be almost comprehensive since 1994, and less comprehensive 1988-1993. Transcripts of discussion at hearings is selective. If the full text is not available within the database, copy and paste the document title into the library catalog to see if it is available in Andersen Library's Federal Documents collection. Older materials (especially pre 1976) may not be cataloged, so write down the SuDoc number and ask for assistance with finding it at the Reference Desk. If Andersen Library does not have a federal document, we may be able to find it online or request it from another UW library.

For example, if you search for "school lunch" you will get results including Congressional documents, hearings, prints, reports, and more. It'll look something like this:

Click on a document type to go to that part of the results list. If you go to hearings, you can click on titles that sound promising, e.g.,

If you click on this title you'll see (note: hearing title, link to some full text of testimony, SUDOC number, descriptors, and list of the witnesses at the hearing):

If you click on the "Details" tab in the catalog, you'll see additional information including subject headings, which can be clicked to find more items on those same subjects or the words can be incorpoated into your searches: 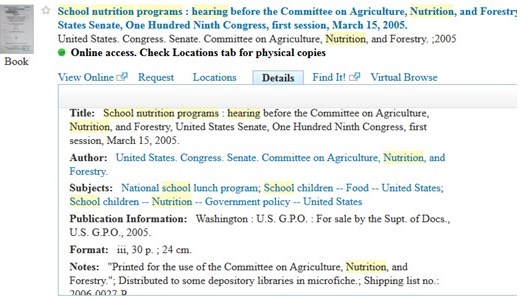