The Nexis Uni database is the primary tool for finding federal and state cases at UW-Whitewater, but some other resources also are listed below. Use the search tips on the "Using Nexis Uni" tab for keyword searching. Use options on the left of search results to search within the results, or to limit by date, court, etc. See "Legal Research: A Guide to Case Law" from the Library of Congress for additional information about case law research. 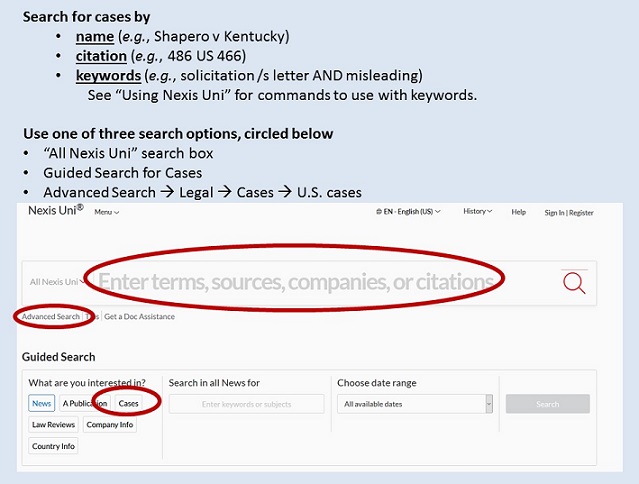 Cases from appellate-level courts in all states are available in Nexis Uni too, as well as from most state court websites. See the Wisconsin Law webpage from the Wisconsin State Law Library for information about courts in Wisconsin.

Annotations in statutes or codes may contain citations to court cases that have interpreted the law. Go to Wisconsin Statutes & Annotations. Click "Statutes & Annotations" or use the search box at the top right corner to go to the desired section of the statutes. Below is an example (19.35(7)(c)).

When the same case is available in more than one publication, the citations to the other publications are called parallel citations.

Briefs filed for U.S. Supreme Court cases are available from Nexis Uni (Aug. 12, 1936- ) and FindLaw (1999-2007?). An analysis of cases and a listing of briefs filed is provided by the American Bar Association's Preview of  United States Supreme Court Cases (2004/2005 term-previous term; access to the current term requires a subscription except for one featured case each month for use in classrooms).